The real estate market has continued to be unpredictable and exhibit unexpected twists and turns, a continuing trend throughout 2022. October carries on some of the unexpected market shifts witnessed and analyzed in September. It feels too soon and not prudent to call this most recent market performance a sign of things to come – for better, or worse. In the meantime, let’s look at the ways in which the detached homes market in Vancouver fared during October 2022.

The detached home market in Vancouver West was blessed with some unexpected figures after a turbulent summer and early autumn. The total sales ratio was 13%. This stemmed from a 35% increase in sales against an 11% reduction in inventory. In terms of prices the Sale to List Price Ratio rose by 5% to 98%, offsetting a 9% reduction in the average sale price to $3,103,500. Vancouver West is in a balanced market right now.

The most active priceband in Vancouver West is interesting to say the least. Homes priced between $2M to $2.5M sold at a ratio of 105%. The next most active priceband was a slightly more reasonable 24% sales ratio, for single-family homes priced from $3 million to $3.5 million. The majority of housing inventory on the Westside is above $3,500,000 so it’s possible these high performing pricebands are indicative of the continued challenges posed by higher interest rates.

The most popular neighbourhoods in the Vancouver West house market are Point Grey, Dunbar & Kerrisdale. It’s no surprise that these neighbourhoods would make an appearance in a Top 3 like this as they have long been associated with a suburban lifestyle and are desirable neighbourhoods to own homes in. The trio led in both sales ratios and volume of sales. 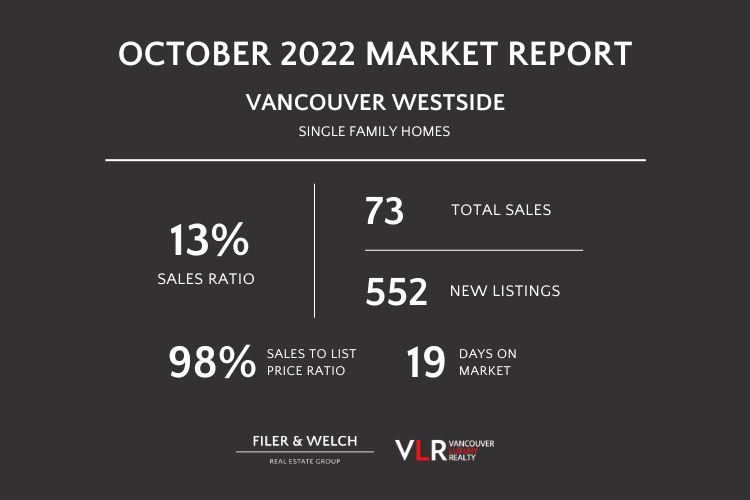 Similar enough to Vancouver West, the sales ratio of homes in East Vancouver was 13% – but this is where the differences begin to be apparent. Unlike with Vancouver’s Westside, the total number of sales declined by 15%. However, the Sale to List Price Ratio rose 2% and the average sale price also rose 3%, bringing the average price of a home sold in Vancouver East to $1,702,500.

The most active priceband during October had a 55% sales ratio, specifically for detached homes in Vancouver East costing $1,250,000 to $1,500,000. Further to this point, the majority of homes sold during October were priced from $1.25M to $2M with an average 25% sales ratio. In comparison to Vancouver Westside single-family homes, these houses in East Vancouver are quite affordable.

Neighbourhood-specific market performance in Vancouver East was not wholly unexpected. While Killarney led the sales ratios of Vancouver East neighbourhoods at 32%, Renfrew pulled ahead in total sales with 11 houses sold in October. Hastings-Sunrise held a comfortable third with a balanced number of sales paired with a good sales ratio. 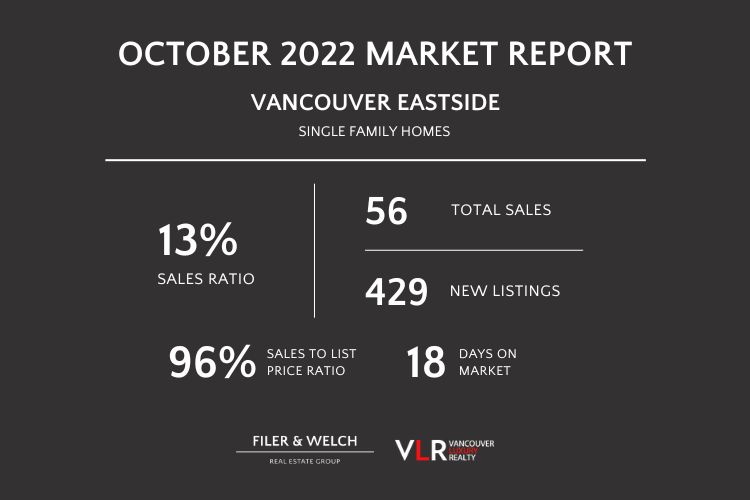