It’s fair to say nobody can quite predict with absolute certainty what will happen in real estate in 2022. However, it is nice to see the real estate market for condos & townhomes in Vancouver’s three neighbourhood regions – Downtown, West & East – has seen a collective uptick last month. This is great news, especially after the market’s shifting in September.

While Vancouver West & Vancouver East experienced growth in sales, Downtown remained at 127 sales for the month of October 2022. This is a 0% change. While it isn’t growth, it also isn’t a reduction, even though there was a 1% increase in condo & townhome inventory. On the subject of prices, the Sale to List Price ratio fell only 2%, mirroring the fall in average sale price. However, there is a highlight: the average days on market fell 30%!

The most active pricebands certainly reflect the change in sale price. First, the priceband of homes costing between $500,000 to $800,000 saw broad sales performance. Also, condos & townhomes priced from $1,000,000 to $1,500,000 was the other most active priceband as most properties above $1.5M saw dwindling sales numbers against increasing inventory counts.

Just over 90% of units sold during October were condos & townhomes with 2 bedrooms or less.

Among downtown Vancouver’s four MLS® neighbourhoods, the most active one is Downtown VW with a sales ratio of 15%. In terms of the volume of units sold, that translates to 49 sales.

The runner-up in second place is Yaletown. With a 17% sales ratio, Yaletown is a contender for the leader spot, but its 38 total sales relegates the neighbourhood to second place in condo & townhome sales for October. 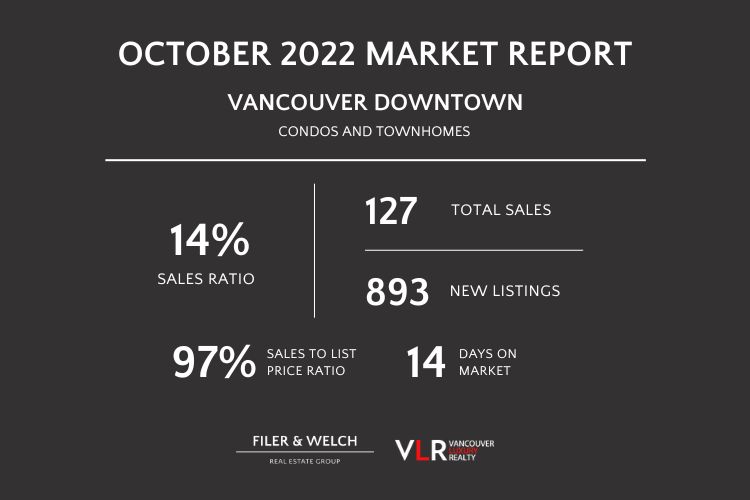 Overall, Vancouver East led the condos & townhomes market for October 2022. Posting a strong 24% sales ratio, the area saw an increase in sales by 14% alongside an inventory bump of 7%. While sales and inventory went up, the Sale to List Price ratio actually went down by 2% to 96%. That means most properties are selling for an average of 4% under asking.

However, the average sale price increased by 5% to $669,000 – even despite the decline in sale price ratio.

The most active priceband in Vancouver East during October 2022 was between $500K to $900K. Condos priced between $500,000 to $900,000 proved to be popular, likely in part due to their attainable price point in an economy where interest rates have increased in recent weeks. Similarly priced townhomes were a draw for homebuyers seeking to enter the market too. View available townhomes for sale in Vancouver East.

Studios and 1-bedroom condos & townhomes in East Vancouver were the most popular property types during October, with a sales ratio of 33%.

Grandview-Woodland. Despite the name, the most recognizable landmark is that of Commercial Drive. This is an area popular with young adults, and longtime Vancouver residents seeking to downsize into a familiar neighbourhood. The neighbourhood saw 11 total sales for condos & townhomes last month. 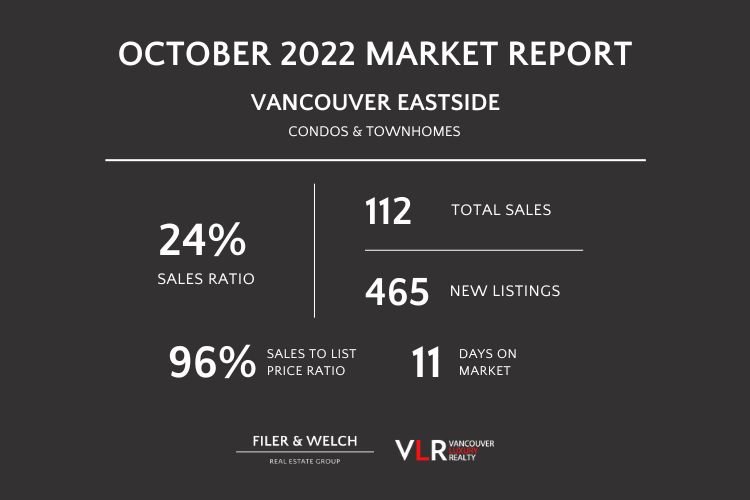 Vancouver West commanded a decent increase in sales of 18% during the last month – a total of 134 sales. This gave the region an overall sales ratio of 19%. The average sale price also increased, rising 3% to $941,000.

Homes priced below and above 1 million dollars sold very well during the month of October. Condos & townhomes priced from $500,000 to $900,000 sold very well during October. Commanding a combined sales ratio of 23%, condos & townhomes costing from $1M to $1.5M rounded out the upper reach of popular home sales. Properties priced in excess of $1.5 million sold very few units compared to the larger amount in inventory.

An odd trend in condos and townhomes is how 2-bedroom properties make up almost 50% of total sales in Vancouver’s Westside. That’s 71 out of 134 sales. This clearly demonstrates a preference among homebuyers to go beyond studio or 1-bedroom homes, but still keeping things affordable compared to 3 bedrooms or more.

Last month’s neighbourhood-by-neighbourhood performance is certainly memorable, if not for Kitsilano having a 40% sales ratio for the month and leading the Vancouver Westside in total sales at 35 properties sold. Even as summer sun turns to autumnal rain, Kitsilano still reigns supreme. View condos for sale in the popular beachside Kitsilano neighbourhood, and townhome listings available on MLS®.

Second place goes to the popular Fairview neighbourhood. Even through ups and downs, this neighbourhood in Vancouver West has been a popular place for attached homes. Potential homebuyers should give serious consideration to condos available for sale, or townhome listings in this longtime favourite of a neighbourhood.

Finally, in a close third is University VW with 21 sales, yielding a 22% sales ratio. Interested in living in the University neighbourhood? View available condos in the area here, or take a look at townhome listings for sale. 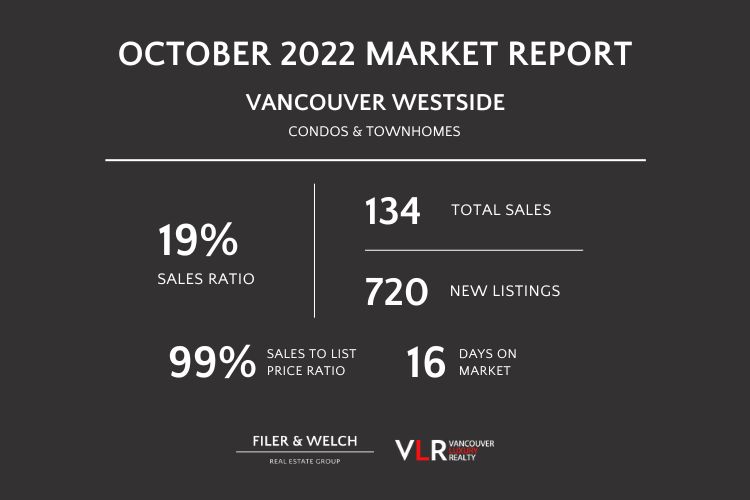